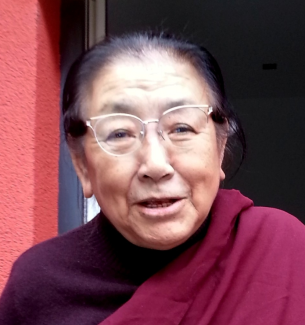 Is the patriarchal past of Christianity blown out of all proportion these days? I was thinking about this the other day, about how come Christianity is so often invoked when many religions have unresolved baggage, when even amongst followers of the goddess you will still find a hell of a lot of the authors in the limelight are testosterone enhanced, when I came across this article about the Sakya Tharpa Ling Centre, a Tibetan Buddhist centre out near me in Sydney’s western suburbs. In the article, “A Lesson of Living the Good Life,” Tibetan historian Di Cousens makes the observation:

“Buddhism is widely seen as a very patriarchal religion for good reason.”

“The teaching structure is 99.9 per cent male, so it has been a bit of a battle for women to have any position in the hierarchy,” she says. “There has only been a handful of famous women teachers and there must be thousands of famous male teachers, and it’s not because women lack capability or interest. It’s because the resources have never been made available on any sort of parity for nunneries compared to monasteries, or for women in other walks of life.”

I will let you read for yourselves what Jetsun Kushola, the woman lama being interviewed along with Di Cousens, had to say following that, but this comment alone amply demonstrates my point: many religions have unresolved issues. So why are monotheistic religions in general, and Christianity in particular, so singled out as so horribly patriarchal in comparison to non-monotheistic religions? I think in many cases it has to do with a lack of experience and perspective on the part of commentators. People think they know a lot more about Christianity than they actually do, often due to some formative (but limited) childhood experience, and just as often have an overly romantic view on just about everything else.

Now, this is not to say Christianity does not have its issues it has to work through, it certainly does, but there has been quite a bit of work done in some quarters and that deserves to be acknowledged. For example, of the two churches I have been a part of long term, one Sydney Anglican, one Sydney Baptist, BOTH had Sunday services in which women preached with varying degrees of regularity. One of the services was led by a woman for over a decade. Yes, I am aware that not all Christians would approve of this, but in these churches they did, and they were not noted for being especially liberal. Not at all. What is more, I fondly remember one service at my first church where my wife stood up in the middle of the service, in front of a thousand people, and corrected the preacher after he said something that was incorrect. The preacher acknowledged my wife’s expertise in that area and humbly stood corrected, adjusting his sermon accordingly. Is this what you’d expect if Christianity was so intrinsically misogenistic that its unreformable, as many believe? The truth is, many Christians are highly aware of the respectful attitude Jesus had to women, women such as Mary Magdalene, and see his example as one to follow. Throughout Christian history that attitude has kept bubbling up when institutional control weakened and it has taken active suppression by vested interests to clamp it down each time. Far from being intrinsically anti-women the opposite is true of Christian spirituality given free reign.