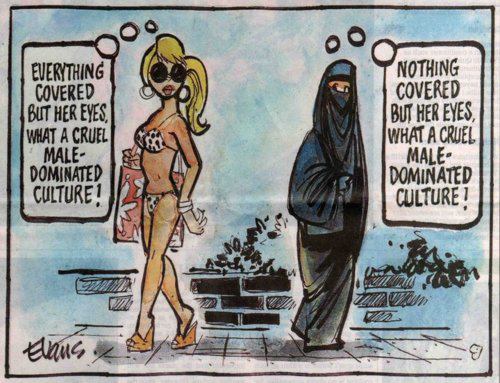 There have been some vigorous debates over dress codes lately but I have to ask, what would a universally acceptable dress code even look like? In some (sub)cultures full body coverings including face coverings are mandatory for all. In some (sub)cultures clothing is optional. Two extremes on a spectrum. In my own culture jeans and shirts are the norm, with bearing shoulders and midriff common in summer in informal settings. Head coverings are acceptable but face coverings of any sort are seen as subversive and banned in high security areas. Conversely, full nudity is also considered subversive but permitted in some, more isolated areas. Breast feeding in public is generally acceptable but discreetness while doing so is considered more polite than just lobbing them out. While some countries, such as France, are taking a draconian attitude towards one end of the spectrum, other countries, such as Saudi Arabia take an even more draconian attitude towards the other end of the spectrum. I expect most countries are at different points along that spectrum. I know this is an emotive topic, especially at the moment, but I always seek the bigger picture and what I see is that it may be very difficult to find somethings everyone agrees with. If we just say each to his own, let’s think of what that means. It means naked folk and 100% covered folk potentially occupying the same spaces and everyone being okay with that. The truth is most societies draw boundaries at some point. As an Aussie I’m comfortable where my society draws boundaries – tolerates most things but draws the line on 100% covering and 0% covering in select contexts. But I know I’d be a fool to universalise my expectations. What’s the answer though? I don’t know.

3 thoughts on “Hot under the collar over dress codes?”